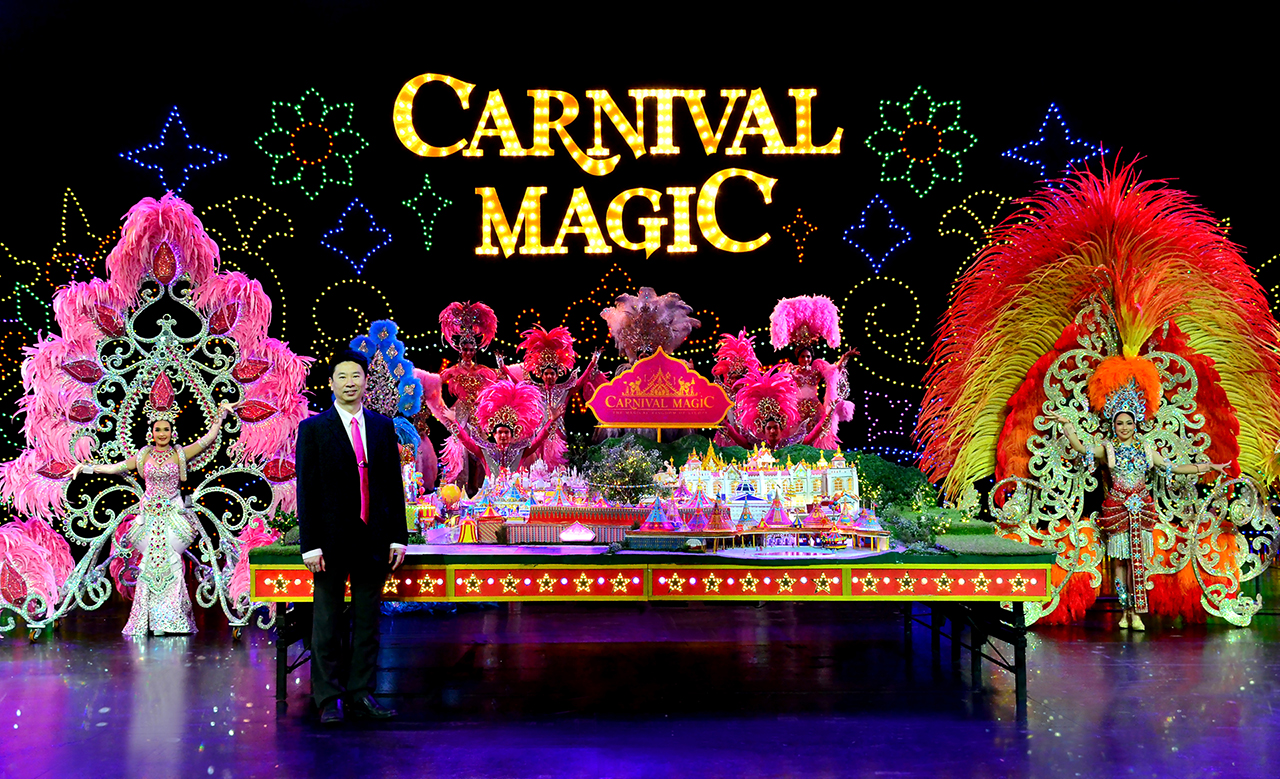 ‘Phuket FantaSea’ celebrates its 20th anniversary with the grand opening of the world’s first Thai Carnival Theme Park in Thailand. Built with a budget of over THB 5 billion (USD$ 160 million) and spanning over 40 acres (100 Rai), Carnival Magic aspires to become an exciting new landmark tourist destination in Asia and is expected to attract over 1 million tourists per year with annual revenue of no less than THB 1.5 billion.

‘Carnival Magic Co., Ltd.’ is an affiliate of ‘Phuket FantaSea Co., Ltd’ and is located in Kamala Beach in Phuket province, adjacent to Phuket FantaSea.

Mr. Kittikorn Kewkacha, the CEO of ‘Phuket FantaSea Public Company Limited’ and ‘Carnival Magic Co., Ltd.’, explained the significance of creating this new project. “This year is the 20th anniversary of ‘Phuket FantaSea’. We are celebrating it with the opening of an astonishing and uniquely new project – ‘Carnival Magic’, one of the largest nighttime theme parks ever constructed, and the first of its kind in the world.”

Inspired by the many traditional festivals, carnivals and market fairs that abound throughout the Kingdom, Carnival Magic aims to establish itself as the very first Thai Carnival Theme Park, rejoicing in the vibrancy of Thailand's rich cultural heritage and offering an experience unmatched by any other theme park on earth.

“Our mission was to establish a landmark destination that would encourage more visitors to the island, and in so doing, help create jobs, stimulate the local economy and ultimately boost the local tourism industry. We wanted to offer something positive, entertaining, uplifting, and welcoming that would showcase the beautiful uniqueness of Thai culture with the enhancement of modern technology and special effects.”

Various quality products from all regions of Thailand will be featured in one-of-a-kind themed souvenir shops lavishly decorated with carnival lights and Thai inspired architectural features.

Zone 2 – Bird of Paradise Restaurant: A fully air-conditioned gala buffet restaurant that can accommodate over 3,000 visitors and is reached by passing through an enchanted Garden of Paradise entranceway. With an interior design suggesting a heavenly hall watched over by 2 giant peacock sculptures in full plumage, Bird of Paradise will offer over 100 varieties of menu items featuring delicacies from all around the world. Three separate dining halls are also available for private dining events.

A special feature of this restaurant is that guests will first arrive at a waterfall known as “Happiness Falls” and ascend to the restaurant via a mystical barge called the “Barge of Happiness” which rises approximately 7 meters to deliver guests into this uniquely themed restaurant.

Zone 3 – River Palace Theater: The River Palace Paradium is a parade stadium presenting the first ever production show of its kind in the world. Offering seating for approximately 2,000 guests and featuring a performance stage 70 meters long and 22 meters wide, the entire building measures over 200 meters in length, making it one of the largest theaters ever constructed in the world.

Featuring giant record-breaking pageant wagons and flying parade floats, the theater also boasts state-of-the-art lighting, sound and special FX, including one of the largest LED screens ever to be installed in a theater and the largest parade float ever constructed at 70 meters long comparable in length to an Airbus A380.

With production features such as aerial ballet, animatronics, gigantic creatures and a cast and crew of over 400 on one of the largest stages ever built, the River Palace Parade highlights the very best of Thai culture in an original new presentation.

Zone 4 – Kingdom of Lights: An enchanting world of sparkling gardens and breathtaking landscapes beautifully decorated with over 40 million lights. The main highlight of this zone is the “River of Lights” which features luminaries laced with tens of millions of lights, over 50 kilometers in length overall, and best observed by crossing a dazzling lake-spanning bridge offering a panoramic view of the entire illuminated zone.

In presenting his strategy for introducing ‘Carnival Magic’ as an iconic international tourist destination, Mr. Kittikorn explained “We emphasized the importance of a 360 degree proactive marketing plan, using both online and offline platforms. We promote this project not only domestically, but also overseas, in more than 40 countries where people have traditionally enjoyed traveling to Thailand. We also provide road shows into popular tourist destinations in Phuket and in other provinces all over Thailand. This project is also being promoted to thousands of domestic and international travel agencies, which have been a steady source of

alliance for a long time. We have started to promote our brand using online media and TV exposure from now until next year. The targeted group for ‘Carnival Magic’ is divided into both the international market as well as the domestic Thai market place, with the proportion of 70:30 respectively. We expect to attract more than 1 million foreign tourists per year, with projected earnings of not less than THB 1.5 billion per year.” “Carnival Magic is our dream project and a gift to the people of Phuket and all of Thailand. And we sincerely hope that it will become a new, wonder filled destination that all visitors will enjoy and all Thais can be proud of.”

Mr. Kittikorn also expressed his hopes for the future development of the tourism industry overall which maintains a huge potential in Phuket province, a destination notable for its natural beauty, established tourist accommodations and its ability to facilitate tourists within its existing infrastructure.

He noted that there are approximately 12 million tourists visiting Phuket per year, generating an average revenue of THB 400 billion yearly. 70% of those tourists are foreigners, so that the participation from every relevant sector, both governmental and private, is crucial to achieving lasting prosperity.

“We are deeply committed to creating a new tourist attraction that showcases our unique and richly colorful Thai culture and to deliver a truly original tourist experience, quite different from other tourist destinations. And we believe that this will ultimately increase revenue, stimulate local economic growth and improve investing sentiment in the province.” Mr. Kittikorn Kewkacha, CEO of Carnival Magic Company Limited, recently unveiled Phuket's newest theme park project, Carnival Magic, to the management team and the staff during company staff meeting and introduced many attraction highlights such as a 2,000 seat theater, a 3,000 seat buffet restaurant, a carnival-themed shopping street and a light park of a grand scale featuring over 40 million lights. Carnival Magic will be opening soon in the early 2020. 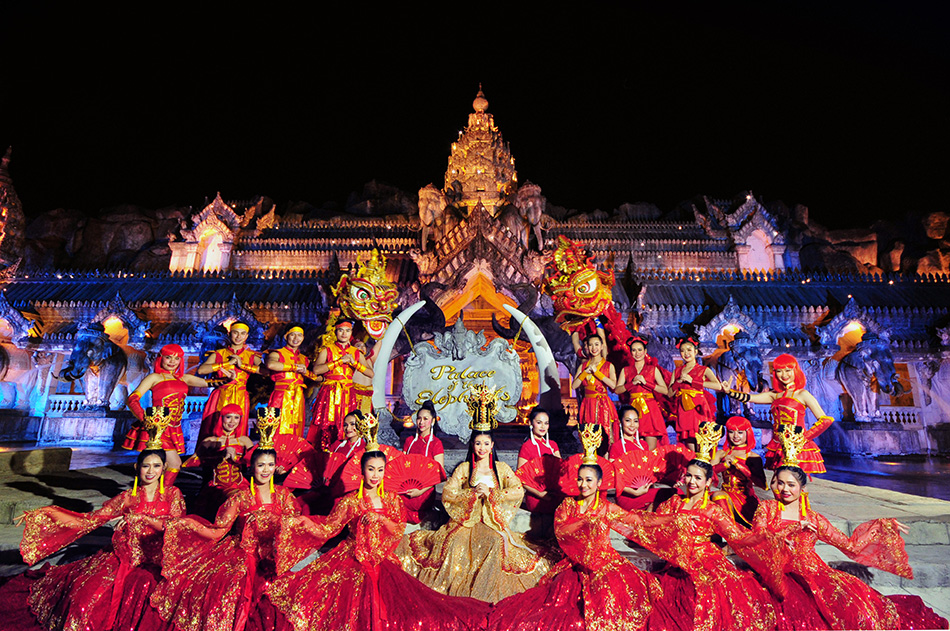 Come and celebrate Chinese New Year with us! The celebration will take place between 25 January – 13 February 2020 and will culminate in “Phuket FantaSea Chinese New Year” show at the Viva Bangkok Stage Theater. The festivities, live music, street performances, and colorful parades await you! Advance booking is recommended by calling Reservation Office at 076 385 111 or Email: ticket@phuketfantasea.fun Immerse yourself in the spirit of Songkran Festival between April 05-17, 2019! Join us in the most fun traditional Thai New Year celebration and enjoy water splashing with our entertainers and the breathtaking “Phuket FantaSea Thai New Year Show” at Viva Bangkok Stage Theater inside the Festival Village, Phuket FantaSea. For more information, please contact our reservation office at Tel. 076 385 111 or 076 680 888, E-mail: ticket@phuketfantasea.fun